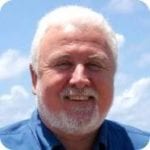 August 3, 2019 – 2-4 pm. Join shipwreck archaeologist, author and Nat Geo television host James Delgado in a discussion of some of history’s most important warship wrecks and what archaeologists are learning from them.  Dr. Delgado’s new book, War at Sea: A Shipwrecked History from Antiquity to the Twentieth Century, published by the Oxford University Press (New York) is being released on August 1, and this is the first public appearance where he will talk about the book and will be available to sign copies.

Dr. Delgado, who has personally explored, dived, and studied a number of the wrecks and sites in the book, will provide insights as an explorer, archaeologist, and storyteller. His past shipwreck investigations have included the RMS Titanic, USS Monitor, USS Arizona (BB-39), Sub Marine Explorer, the buried Gold Rush ships of San Francisco, and Kublai Khan’s legendary lost fleet.

There will be a question and answer period after his talk.