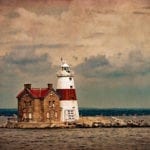 The National Lighthouse Museum was fortunate to have Bill Miller “Mr. Ocean Liner” on board our September 15, 2018 East River/Hell’s Gate/Long Island Sound Lighthouse Boat Tour. You can read his account of the trip here: AROUND THE PORT OF NEW YORK by Bill Miller

August 3rd marked the start of Lighthouse Weekend with our Gala harbor cruise. A champagne Museum Reception preceded the vessel leaving from Pier 1 adjacent to the Museum.  Guests enjoyed a harbor cruise, open bar, hors-d’oeuvres, dinner, and dancing in the moonlight.The following were honored at the Gala and received these awards:

NLM Executive Director, Linda Dianto was featured on Cats Roundtable, This the weekly radio program of John Catsimatidis on AM970 Sunday mornings, 8:30-10am. Click on the link to listen.

Full Speed Ahead to the Fabulous! SS United States Exhibit

The National Lighthouse Museum in partnership with the New York Chapter of the SS United States Conservancy, proudly presented, “Full Speed Ahead to the Fabulous! SS United States.” This exhibit, on display at the Museum from June 14th to August 3rd, celebrated the extraordinary career of the luxury liner known as “America’s Flagship.”

This show traced the life of the ship, from young speed queen and popular cover girl to aging star of yesteryear and nearly forgotten “has-been,” and finally to one of the great comeback stories in U.S. history.

America’s Boating Club – US Power Squadron, Staten Island Club, in collaboration with the National Lighthouse Museum presented a one day boating course. This organization has been teaching safety to boaters since 1914. The exam was given that day and participants obtained their New York Boating Certification and their New Jersey Boating Certification.The course ran from 8:00 am to 5:00 pm. The course included breakfast, lunch, testing, certificate and the official guide book, America’s Boating Course by the United States Power Squadrons.

Captain Violeta Ivanova spoke to us of her lifelong love of the ocean and her experiences sailing the seas. She first saw the Atlantic Ocean as a graduate student in Boston in the 1990s. Over the years, Violeta sailed on rivers and lakes, in bays and harbors, along the New England coast, and among islands in the Caribbean. Finally, in 2017 her dream to sail across an ocean came true, when she sailed from the British Virgin Islands via Bermuda to the Azores, Portugal. From joining the crew in St Martin, through the quirks of sharing 40 feet of boat with three men, to standing solo watches in Force 7 (15 foot) seas hundreds of miles away from land, until her night arrival in Horta Marina on the island of Faial, she recounted the story of her first ocean crossing. It is also a story of following one’s dreams.

Captain Violeta M. Ivanova is a Master USCG-licensed captain and a certified sailing instructor of the American Sailing Association. Prior to pursuing a mariner’s career, Violeta worked as an educational technology consultant and an instructor at the Massachusetts Institute of Technology (MIT) in Cambridge, MA, and as an engineer in industry. She holds a Ph.D. in geoenvironment and geotechnology from MIT, and has also studied in the MFA program in film production at the University of Texas at Austin. What an amazing woman!

This multigenerational educational program enabled participants to learn with their child, grandchild, niece, nephew or other young family member. To complete the course, four sessions needed to be attended consisting of Science, Technology, Engineering and Mathematics. A free Lighthouse Boat Tour for mentor and child was also included. The goals included learning about lighthouses their purposes, architecture, history, stories of their keepers through art, to take a Lighthouse boat tour to see lights up close and to develop a student book of participant’s works to remember the experience. The child and her/his mentor learned about Lighthouses together while developing lifelong bonds using Lighthouses as a catalyst for creating lasting memories!

The National Lighthouse Museum and the America’s Boating Club (US Power Squadron, Established 1914, Staten Island Club) teamed up to present a Basic Weather and Forecasting seminar on Earth Day, April 22, 2018. This seminar was a potential lifesaver for boaters and a valuable resource for weather enthusiasts.

A certificate of participation was presented at the conclusion of the seminar.

Bill Miller, an international authority on the subject of ocean liners & cruise ships spoke to us on the subject of ocean liners. His expertise includes those great ships of the past, those “floating palaces,” as well as the current generation of cruise ships, the “floating resorts”. Called “Mr. Ocean Liner,” he has written over 80 books on the subject: from early steamers, immigrant ships and liners at war to other titles on their fabulous interiors. He has done specific histories of such celebrated passenger ships as the United States, Queen Mary, Rotterdam, France, Queen Elizabeth 2, Costa Victoria, Super Star Leo and Crystal Serenity.

Third Annual Lighthouses are for Lovers and Friends

This was a delightful evening of cabaret at the Museum. Kim Grogg Marin and Friends were back for another memorable performance. This sold out event featured professional entertainment, adult beverages, food, fun and a thoroughly enjoyable evening!

When Nelson Simon signed up as a last-minute crew member to transport a Norwegian schooner from Brooklyn to Bermuda, he pictured it as a sort of pleasure cruise: a week in the Caribbean with a gourmet chef on board, some down time on a tropical island, then a quick flight home. What did it matter that he had practically no sailing experience? The eight other crew members had plenty – they just needed an extra pair of hands. What could possibly go wrong?

The time was October 1991. The ship was Anne Kristine, the oldest continuously sailing vessel in the world. What awaited them was Hurricane Grace, the southern end of what came to be known as “The Perfect Storm.”

In this talk Nelson recounted an unlikely tale that began with a friendly invitation and ended in the dead of night somewhere far from home, with a Coast Guard helicopter above and a dark, angry sea below.

Ships and Their Problems

This lecture commemorated Pearl Harbor and our own Captain Joseph Ahlstrom, NLM 1st Vice President and SUNY Maritime Professor, spoke to us about ships and their problems.

The Ship Model Society of New Jersey exhibited their model ships at the Museum.

The Ship Model Society of New Jersey is dedicated to the pursuit and enjoyment of ship model building in all its forms. Their membership spans all skill levels, from neophyte to highly accomplished and a wide range of interests, from gadget guru to historical recreator.  They exhibited ship models Saturday, November 18th from 11-4 pm at the Museum. The model ship builders demonstrated the building of a small model ship and also conducted appraisals for repairs of ship models owned by guests.

The exhibit was included in the admission fee and admission is free for members.

Our family fun tradition of Fright House continued at the National Lighthouse Museum. (Parents, it’s not scary for youngsters.)

This year featured a haunted model train exhibit, and a visit from “Gladys”! This was a free event but participants were asked to register to help with our planning. It was a fun day for the entire family and was attended by approximately 70 people.

Lecture: The Burning of the Quarantine and the Aftermath

Dr. Robert Marraccino and Dr. Michael Vigorito returned to speak to us concerning the riots and burning of the Quarantine and resulting consequences.

As part of our 7th Annual Lighthouse & Lightship Recognition Weekend, Wayne Wheeler, President of the United States Lighthouse Society will give us his unique prospective on lightships.

The Introduction of the Fresnel Lens into the USLHE

In 1821, after several years of studying the properties of light in his spare time, Augustin Fresnel, a French civil engineer working for the state’s department of bridges and roads, developed a lighthouse lens that now bears his name. The Fresnel lens concentrates light into a brighter beam by capturing more than 80% of the escaping light through the precise arrangement of the glass discs and prisms that make up the larger lens. This concentration into a brighter beam of light allowed the light to be projected further out to sea for the aid of commerce and navigation.

James Risk will discuss the introduction of different kinds of lens technology in the United States and its introduction to other parts of the world.

Join us for an event to celebrate the America’s Cup Race from Bermuda. We will have a live feed of the event along with a BBQ and lecture by Andrew Wilson, historian, sailor, and librarian at the New York Public Library. Mr. Wilson will speak on the history of the race and it’s connection to Staten Island. Here is a sample:

The Island’s shipyards provided maintenance and last minute modifications to the competitors going back at least to the British challenger Countess of Dufferin in 1876 and continuing on until 1920 when the last races were held in New York Harbor.

Daily Advance headline July 22, 1920 announcing the arrival of both  Resolute and Shamrock IV at the Staten Island Shipyard Co. docks in Port Richmond.

1920’s defender and challenger in the dry docks at Port Richmond.  Port of New York Annual. Port Richmond had been a work site for America’s Cup boats dating back to 1876 when the British challenger Countess of Dufferin had her hull modified and painted there.  Shamrock II is known to have had her sails fitted out at Tompkinsville and likely had hull work done at Port Richmond in 1901.